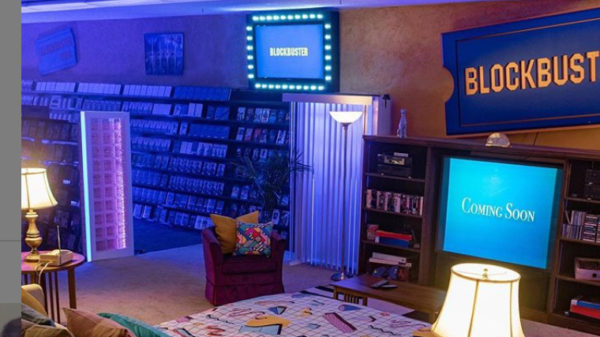 The last Blockbuster in the world is turning itself into an Airbnb next month, and three families will get to stay overnight.  Only people who live around Bend, Oregon can apply though.

This is like an eight-year-old’s dream . . . if they were living in 1992.  The last Blockbuster store in the world is in Bend, Oregon.  And next month, three families will get to stay there OVERNIGHT, and watch as many movies as they want.

The owners are basically renting it out for FREE on Airbnb for three nights next month.  They’re only charging $4 a night, which is the same price they charge to rent one movie.  (Here’s the Airbnb listing.)

They turned part of the store into a ’90s living room with a NON-widescreen TV . . . VCR . . . bean bag chair . . . and pull-out couch, plus candy and snacks.  They’ll also be disinfecting the whole store after each family checks out.  (Here’s a photo.)

You have to live in the area, and there’s no word if they plan to open it up to more people later on.

Sandi Harding has been the manager since 2004.  She says the only reason they’re still in business is because the community goes out of its way to keep renting movies from them.  So they wanted to do something fun to say thanks.

One thing you CAN do is call for movie recommendations.  Netflix has algorithms, so they launched a jokey ad campaign this year for “Blockbuster CALLgorithms.”

The last open Blockbuster in the world (located in Oregon) has been turned into a @airbnb where you can spend a night. The last remaining Blockbuster is listed on Airbnb for $4 a night. Fun fact: Blockbuster could've bought Netflix for $50M in early 2000s. Today Netflix is worth $194B. Is this the perfect date night? Tag someone you would like to go with 👇🏾